50 years ago
WIlliam G. Dilley introduced the world to his revolutionary new dynamics processor, the Model 610 Complimiter. A truly unique device, the Model 610 was not only the fastest, cleanest and quietest of it's type, but was also capable of providing completely separate peak-limiting and compression functions. For decades the Model 610 could be found safeguarding levels to tape, strapped across the mix bus, and even before record lathes in some of the most well known recording studios in the world. 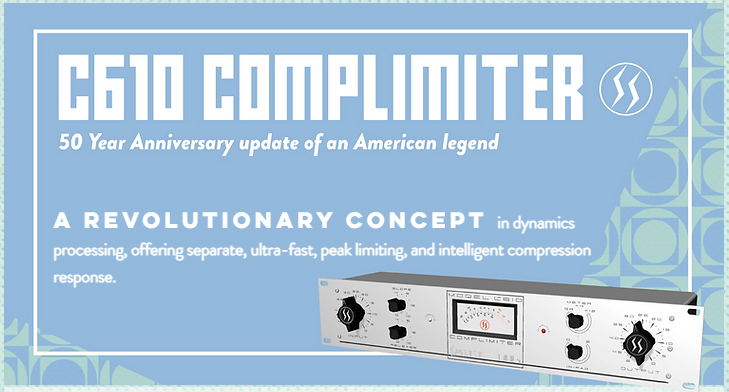 The original Spectra Sonics 610 Complimter was lean and protean in design. Conceived and designed in 1968, the compressor/limiter circuit of the 610 allows for independent compression or limiting, simultaneous compression and limiting, or, compression only. Because the limiter is always present, any audio program transients, which can modulate the compressor function, are eliminated. It's versatile in its use as a microphone or instrument preamplifier, input channel or two buss compressor/limiter, mastering limiter, record lathe limiter, or as an impressive and unique effects device when used in "over-driven" mode. It's applications are either publicly praised, or held tight as secret recording-studio weapons, only to be discussed with a few close friends.

The traditional “pumping” artifact of conventional compressors is not present with this design. Additionally, compressor circuits that utilize a 610 in limiting mode prior to the other device, will exhibit reduced “pumping”, as well as improved headroom and lower distortion. The compressor function of the C610 offers natural compression without bandwidth limitations or issues involving de-essing. Release times controlled during the compression function allow for extended times to ten seconds. The release time function is an area wherein many users have found unique applications in the “effects” realm of the unit.

C610 As a Microphone or Instrument Preamplifier

The peak limiting function of the C610 will allow for improved dynamic range, extended harmonics content, reduced transient distortion, and lower overall system noise. In the microphone arena, it is not unusual to encounter transient peaks above 20dB with drums, guitars, and other instruments. The C610 eliminates the negative effects of peak overload, and the resulting distortion, or loss of gain, (reduced levels to avoid peak overload). The result of using the C610 is readily apparent. Drums sound like drums during playback, bass guitars reproduce all frequencies without overload or loss of harmonics, cymbals bells, and tambourines, no longer smear or blend together.

Peak limiting in a conventional console mix buss will allow for significant channel level increases, without overload, and minimize the loss of harmonic content. In DAW applications, increased levels may used as the peak limiter function of the C610 will decrease converter overload due to audio program transients.

-MADE IN THE USA

Release Time: Continuously variable from 50 milliseconds to more than 10 seconds