This versatile interface embodies a zero-compromise approach to hardware – made readily accessible via its redesigned software control panel.

The Discrete 8 Pro allows connection between any signal source and any destination for turning any session scenario into reality. Yes, seriously: every analog or digital output, effect strip or DAW track can receive any of the analog or digital inputs, effect returns, computer source channels or the four stereo mixes. All this flexibility is accessible via the full virtual patch-bay or the simplified routing view of the original Discrete interfaces – the choice is yours.

The A-D/D-A converters and clocking are at the heart of every studio. The Discrete 8 Pro has been upgraded with latest generation converters (up to 130dB of headroom), while keeping the 64-bit AFC™ clocking technology established by our industry-standard master clocks. With the interface in your rack, you can experience a new level of detail in your recordings and enjoy wider soundstage for an exceptional stereo image in audio playback.

The Discrete 8 Pro packs eight discrete Class-A microphone preamps, formed of six transistors each and based on circuits found in classic recording consoles. The proof is in the clarity, depth and ultra-low noise floor, with up to 65 dB of gain to satisfy even the hungriest mics.

All eight inputs accept XLR as well as line-level TS/TRS jacks, and the two front panel inputs can even be switched to Hi-Z instrument inputs.

Stack up your processing
chain and send to any output

Our unique Synergy Core platform gives you access to hardware-based analog-modeled outboard recreations. Running on a hybrid system of one FPGA and two DSP chips, you can monitor, record and mix using an ever-expanding library of low-latency processors. Even at the highest sample rate, the Discrete 8 Pro supports the full number of effects, simultaneously.

With the Discrete 8 Pro you can load effects on up to sixteen channel strips – this is doubled compared to the original Discrete 8 Synergy Core.

You can process any signal source – including all digital and analog inputs and outputs.

The interface is mic modeling ready, featuring an extensive library of all-time favorites to emulate when using the Edge series microphones. 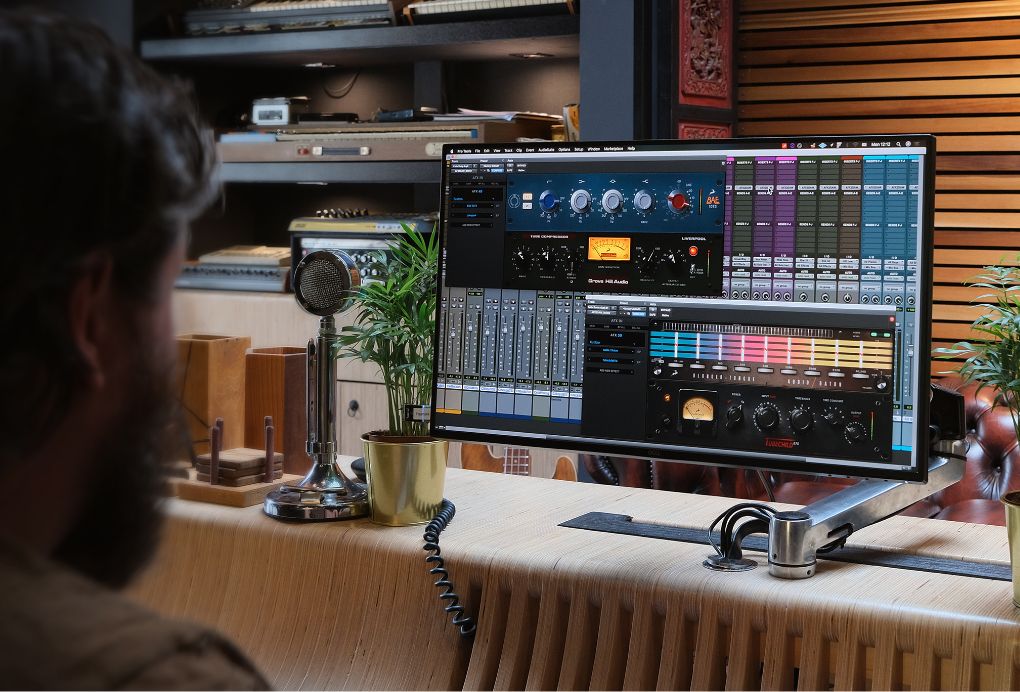 Taking advantage of high-speed Thunderbolt™, the afx2daw plug-in lets you use Synergy Core effects inside most popular DAWs, providing native workflow while keeping all the processing inside the interface.

afx2daw is available as a separate purchase from our software store, for macOS and Windows.

Going beyond the basics

With a wide variety of I/O options you can easily adapt to any recording scenario. The following set of dedicated features come in handy as workflow requirements evolve.

Sync the rest of your digital hardware to your Discrete with three Word Clock outputs. With the Word Clock input, you can slave the interface for more versatility in your clocking configuration.

Take your clean guitar signal outside the interface and record it back using your favorite amplifier/cabinet combo, without needing a reamp box.

Choose any of the eight mic inputs or the dedicated, built-in talkback mic on the front panel, to send to the monitor and headphone outputs.

• Class-leading AD/DA conversion with up to 130dB of headroom.
• Recording, mixing and playback at up to 24-bit/192kHz.

• 8 × Discrete 6-transistor preamps with 65dB of gain for pristine recordings. All work as microphone/line and two are also Hi-Z inputs, on combo XLR jacks, and supply 48V of phantom power.

• Two reamp outputs on TRS ¼ jacks for further amp processing of guitar signal. They can also be used as an additional stereo monitor output – this allows you to have two pairs of monitor speakers playing together simultaneously.

• Three word clock outputs letting you distribute the interface’s highly stable clock signal across your studio and a word clock input allowing you to sync the Discrete 8 Pro Synergy Core with other gear.

• Expanded routing capabilities – switch audio sources per channel based on a drop-down menu sequence or make use of a virtual routing matrix.

• Option to work without being connected to a computer (standalone operation).

• Wireless control of software features from a separate computer connected to the same network.

• Modeling Engine allowing pairing with the Edge line of microphones for real-time use of vintage microphone emulations.